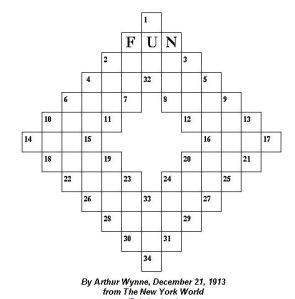 1. Before you fold Saturday’s newspaper into a quarter and begin work on the crossword puzzle, faithful readers should pause for a moment to celebrate the 100th anniversary of the first published crossword puzzle.

2. That puzzle, the creation of journalist Arthur Wynne of Liverpool, England, appeared in the New York World on Dec. 21, 1913. He called it a “word-cross.

3. According to the Web site of the American Crossword Puzzle Tournament, within a decade crossword puzzles were common in newspapers across America.  The fad exploded, and libraries in New York City expressed concern about crossword fanatics monopolizing the use of dictionaries and encyclopedias to the exclusion of “legitimate readers.”

4. Pearson’s Magazine was the first British publication to feature a crossword puzzle in February 1922.

5. Simon and Schuster published the first book of crossword puzzles in 1924. The book came with a pencil attached.

6. The Times of London, famous now for some of the most difficult crosswords, published its first puzzle on Feb. 1, 1930.

1. Once we worked crossword puzzles to improve our vocabulary. But did you know there’s research (although as yet unconvincing evidence) to suggest that exercising your mind with crossword puzzles can slow on the onset of dementia?   Read more here.

2. During World War II, the Government Code and CypherSchool asked the Daily Telegraphy to organize a crossword puzzle competition. The challenge was to solve the Telegraph’s crossword in less than 12 minutes.  Those who succeeded were asked to participate in “a particular type of work as a contribution to the war effort.”  They moved to BletchleyPark and joined the team that cracked the German Enigma code, giving the Allies intelligence about German military movements of inestimable value.

3. Before the Allied invasion of Normandy on June 6, 1944, security officers were concerned about the appearance of a number of D-Day code names in the Daily Telegraph’s crosswords.  A puzzle on May 2 mentioned Utah, the code name for one of the American landing beaches.  Other puzzles mentioned Omaha, the name of the other American beach, and Mulberry, the then secret concrete harbors that were to be towed across the English Channel and set in place off the French coast. Just four days before the invasion, a puzzle include Neptune, the name for D-Day naval operations, and Overlord, the code name for the overall operation. The author of the puzzle was interrogated but the investigators concluded that he wasn’t attempting to pass messages about the invasion.

4. Want to work that first crossword puzzle?  You can find it here.

5. For a story National Public Radio broadcast on Friday about the anniversary of the crossword puzzle, click here.