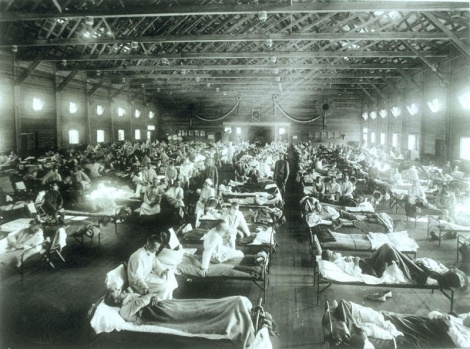 I wrote this story two years ago for Active Age, a monthly newspaper for seniors around Wichita.  I thought it could give us a worst case glimpse of a future dominated by the coronavirus.

In 1918, the deadliest epidemic in human history swept across the globe. By the time it had spent its fury, at least 35 million people, perhaps as many as 100 million, were dead.

It was called the Spanish Flu solely because the awful pandemic received unfettered publicity in Spain, because that nation was a neutral in World War I and had no war-time censorship, especially after the flu touched the royal family.

In fact, many epidemiologists and others who have studied the evidence believe that it all started right here in Kansas, that Haskell County was the match and Camp Funston, a World War I army training post within Fort Riley, was the tinderbox.

John M. Barry, in his book The Great Influenza, wrote that Lorring Miner, a country doctor from Sante Fe, then the Haskell County seat but now vanished from the land, first saw a patient with particularly intense influenza symptoms – severe headache, body aches, fever, cough – in late January or early February 1918. Within days he had treated dozens of similar cases in Sabetha, Sublette, Santa Fe, Jean and Copeland and on isolated farms.

It worried him enough that he reported “influenza of a severe type” to the U.S. Public Health Service. The service offered no advice or help, but included Miner’s alert in its weekly Public Health Reports, which tracked disease activity around the world. And for the first six months of 1918, Miner’s warning was the only flu outbreak deemed worthy of reporting anywhere in the world, Barry wrote.

Combing the archives of Haskell County newspapers, Barry uncovered many reports of illnesses and then in late February and early March 1918, several reports of young men travelling from Haskell County to Camp Funston. The same week the papers reported that several people had fallen ill with influenza in Jean and a young soldier named Dean Nilson came home on leave from Camp Funston for a five-day furlough. Ernest Elliott left Sublette to visit his brother at the camp shortly after his child fell ill. And from Copeland, John Bottom travelled to Camp Funston for his army training.

Barry noted that all three would have arrived at Camp Funston between Feb. 28 and March 2. On March 4, a time lapse that would coincide with the incubation period for influenza, Pvt. Albert Gitchell, a cook at the camp, was hospitalized with the flu.

At the time, Kansas was experiencing record cold. But as the Army surged from 110,000 troops to more than 2 million after the United States entered World War I, housing, bedding, clothing and heating were inadequate in the training camps. So troops often huddled together around heating stoves. Some men lived in tents. But as the weather worsened, the Army ignored health-based regulations on the minimum living space per man and allowed more and more to move into barracks. And in close quarters, the virus took flight within Camp Funston, which on average had 56,000 troops.

Within three weeks of Pvt. Gitchell falling ill, 1,100 soldiers were sick enough to require hospitalization. Of those, 237 developed pneumonia and 38 died.

From Funston, Barry theorizes, the disease spread as soldiers completed training and were assigned to other bases or rode troop trains to ports where they boarded ships for France and the battlefields of World War I. Within two weeks of the first reported cases at Camp Funston, 10 percent of the troops at Camps Forest and Greenleaf in Georgia had the flu. It would quickly spread that spring to 24 of the 36 largest Army camps in the United States and 30 of the 50 largest cities, many near camps. It first turned up in Europe at Brest, the major port of entry for American troops arriving in France.

In the fall, the disease mutated into a more deadly form, and a second, killing wave hit in October 1918.

In Kansas, there were 899 civilian deaths attributed to influenza in October and 1,919 more attributed to pneumonia, which was often the result of the most serious flu cases.
The Oct. 8, 1918, issue of the Topeka State Journal was filled with influenza news. The secretary of the State Board of Health, Dr. Samuel Crumbine, had already directed that public meeting places, such as churches, schools and theaters be closed in many towns, including Lawrence and Hays, to try to stop the spread of the epidemic. State institutions, such as colleges, were placed under quarantine. 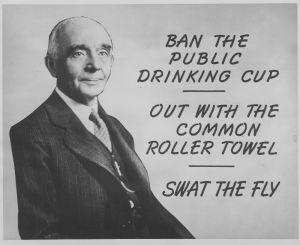 Dr. Crumbine secretary of the Kansas Board of Health, was already a national leader in the field of public health when the influenza pandemic struck in 1918.

Kansas was fortunate to have Dr. Crumbine as secretary of the state Board of Health. Even before the influenza epidemic, Crumbine was known beyond the state’s borders for public health policy, including a “swat the fly” campaign to reduce insect-borne illnesses and another campaign to discourage the use of the common drinking cup on railroad cars. He also discouraged spitting on the sidewalk, and some cities started fining people for it.

When the influenza epidemic became obvious at Camp Funston, Dr. Crumbine launched an educational campaign, with a brochure describing the symptoms of the flu and discouraging healthy people from contact with those showing symptoms. 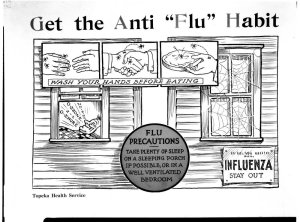 The Kansas Board of Health created informational pamphlets for the public.

On Oct. 10, Wichita city physician Dr. Thomas J. Carter banned indoor public gatherings and a quarantine on all people with flu symptoms. Wichita’s Fall Fair and Exposition closed down, but auto races at the West Side Track were allowed to continue for another day because they were held outdoors and thus not perceived as a threat.

Classes at Fairmont College were cancelled, and members of the Student Army Training Corps with flu symptoms were confined a large room in the college’s Fiske Hall, with a guard posted to keep the ill inside and others outside. The emergency orders also limited store hours and the number of people who could be in a store at any one time. No more than 10 people were allowed on a street car.

When Wichita’s emergency order was extended to churches, ministers arranged to publish their sermons in the local newspapers. 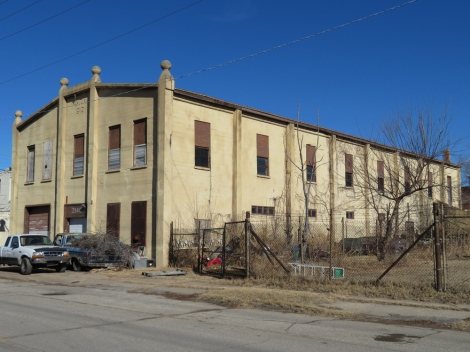 On Oct. 5, 1918, the Wichita Red Cross Influenza Hospital opened at 2146 N. Topeka, a two-story building that had been built six years earlier as the Wichita Manual Training Association, the initials of which are still on the crest of the frontage. Less than two weeks later, on Oct. 18, the Wichita Beacon reported that the hospital, designed for 100 patients, already had 147.

On Oct. 5, 1918, the Wichita Red Cross Influenza Hospital opened at 2146 N. Topeka, a two-story building that had been built six years earlier as the Wichita Manual Training Association, the initials of which are still on the crest of the frontage. Less than two weeks later, on Oct. 18, the Wichita Beacon reported that the hospital, designed for 100 patients, already had 147, including one three-generation family of nine. Five Wichitans had died of the flu in the previous 24 hours, and 29 in the previous 13 days. Fifty houses were currently under quarantine, and 900 had been under quarantine since Oct. 5.

A ward at the Wichita Red Cross Influenza Hospital before the first patients were admitted in October 1918.

The Beacon reported that there was no chance of churches or schools opening in the coming days. “Every person must continue his precautions of guarding against the disease, especially by avoiding crowds, staying home and being alone as much as possible,” the paper reported.

A month later, The Eagle reported that October had been the deadliest month in the city’s history, with 194 deaths, of which 109 were caused by influenza or pneumonia.

It was much worse back at Camp Funston. On Oct. 4, 1,270 men fell ill with the flu in one day. Four days later the Wichita Eagle reported 2,070 new cases of flu at the camp. For the month, the official Army medical report, compiled after the war, said that 14,548 enlisted men had been hospitalized because of influenza or pneumonia, and 804 died.

Five days later, the state’s adjutant general reported to Capper that most of the sick at Camp Funston were being cared for in 22 buildings that were being used as hospitals. The most serious cases were moved to the Fort Riley base hospital, which at that time held 3,300 patients, 1,200 of whom had pneumonia. But the majority, according to the adjutant general, were recovering.

For the month of October, the adjutant general reported, 958 men had died. That was a slightly higher number that the official Army report, perhaps because it included officers.
The pandemic had started slowly with 34 influenza deaths statewide in January 1918. After the winter months, it tapered off to less than 10 deaths in June and July and none at all in August. Flu reappeared with eight dead in September. Then it exploded in October, when 899 died of the flu across the state and 1,919 more of pneumonia.

Still, in late October some cities thought they had seen the worst and began easing back off their closure orders. But by November, the orders were back in place when it became clear that the epidemic was not in fact ebbing. Some thought that gatherings celebrating the anticipated end of the war, which came on Nov. 11, had reinvigorated the epidemic.
The flu claimed 582 more lives across Kansas in November, plus 848 deaths attributed to pneumonia.

In early December, the Wichita Beacon reported that so many motormen from the Wichita Railroad and Light Co. were sick and unable to work that the city’s street cars were having difficulty running on schedule. On Dec. 2, according to The Beacon, 28 motormen were absent from work; a day later 25 men.

In Wichita, the Red Cross Flu Hospital had treated a total of 615 patients by late January 1919. The hospital closed in March 1919, only to reopen in January 1920, when another influenza outbreak hit.