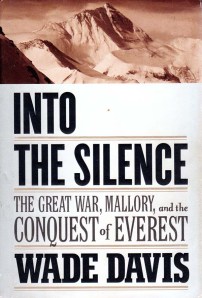 When Britain launched the first three recorded assaults on Mount Everest in 1921, ’22 and ’24, the nation was still recovering from the trauma of World War I, as were most members of the climbing team.

That the first man to stand atop the world’s highest mountain should be an Englishman was a national imperative, and that he should be a gentleman was an obsession among the elite in class conscious Britain.  That hubris would lead to risks some would consider heroic and others would consider clearly unwise.  And it would leave the mountain strewn with bodies, including that of the greatest climber of his time, George Mallory.

Into the Silence: The Great War, Mallory and the Conquest of Everest recounts those first three expeditions to Everest and reaches back before those years to explore what made the men who took part.  The seminal event, of course, was the Great War, which shattered minds and bodies and left Mallory in particular desperate to become a new kind of hero by reaching the summit first.

In fact, no western climber had even approached the base of Mount Everest. The region was unmapped, and most of the first expedition was spent exploring valleys and ascending passes in the attempt to find a route to the mountain.

When the British found the mountain, they broke the altitude record repeatedly.

Norton broke the record again on June 4, 1924, reaching 28,126 feet without oxygen. The record would not be broken until the 1950s, although mountaineering historians have endlessly debated whether Mallory and Sandy Irvine reached the summit three days later.

Mallory and Irvine were last seen high on the mountain, possibly at the base of the summit pyramid, before the mist closed around them. The rest of the British expedition waited until they were certain that Mallory and Irvine could no longer be alive, then descended and returned home.

Twenty-nine years later, Edmund Hillary and Tenzing Norgay became the first to stand atop the world at 29,029 feet.

Britain mourned their deaths.  A memorial service was held at St. Paul’s Cathedral in London, attended by the prime minister, the entire cabinet, King George V and other members of the royal family.

Wade’s account of the three 1920s expeditions is rich in detail, from the routes the climbers took to the clothes they wore, the food they ate, the rivalries and prejudices that determined who would be part of the expeditions and the reckless decisions that led to tragedy, including Mallory’s insistence on another attempt to reach the summit after a violent late summer snowstorm in 1922 led to an avalanche that swept nine sherpas to their deaths.