Munching on sandwiches on a picnic table outside the pub after arriving in Gougane Barra the day before, we marveled at the steep hills that seemed to surround us on every side. One of the riders wondered aloud which way we would go to get out of the park the next day. “This way,” I said, pointing straight up.

Sure enough, the hardest part of the ride out seemed to be the first mile or so, with a 300-foot climb.

A 400-foot descent the followed, and I rued every inch of it.

The first mile or so had been so hard, I remember thinking I hate to give up any altitude because I knew that at some point I’d still have to climb over the looming ridge to the north that stood between me and Killarney.

And sure enough, 4.1 miles into the ride was another climb of more than 700 feet over four miles, followed by another dip and then another 250 foot climb to Creedon’s Pub, billed as “the highest pub in Ireland.” And at 11 a.m. out in the middle of nowhere, the pub was closed.

The only sign of life at Creedon’s “highest pub in Ireland” was a black and white cat, starved for attention, or maybe just starved. The cat, which seemed to have bit of mange working on one hip, hopped up on a picnic table and began a non-stop conversation, not a word of which I understood.

Because we had been warned the pub would be closed, we packed sandwiches from our hotel for lunch. I waited around at the pub for about 40 minutes until Billy arrived in our support fan, carrying extra water so we could refill out bottles for the last half of the ride to Killarney. 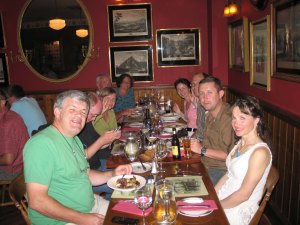 The afternoon ride began with a nice descent for about five miles, then flattened out for the last 17 miles into Killarney. At least that’s the route one of the German riders and I took. We were out in front of the others and missed a left turn to Lough Guitane from the main road.
At some point, we knew we had missed the turn but figured we were far enough beyond it that we might as well just stay on the main road with the traffic buzzing past rather than backtrack.

Later we learned that one of the Swedes, who had a detailed Ordnance Survey map, had stopped at the turn and found the sign pointing to Lough Guitane lying on the ground.
Our group was scattered among three B&Bs that night, so we assembled one last time for dinner, snapped a few pictures to prove that we had survived, exchanged e-mail addresses before going our separate ways.

Already I’m thinking about the next trip. Back to another region of Ireland? Vienna to Prague? Quebec?